In 1959, art historian Carola van Ham founded the auction house ‘Kunsthaus am Museum’ in her hometown of Cologne. As Europe's first female auctioneer she quickly led the company with much optimism, business acumen, and sound art historical knowledge to the top group of German auction houses.

After completing his studies as a banker from 1989–1991 at Sal Oppenheim in Cologne, one of Europe's preeminent private banks, her son, Markus Eisenbeis, became director of the business in 1996. He rejected the possibility of a career in banking in favor of the corporate freedom of the auction house. From 1991 to 1995, he studied art history, archeology, and economics in Bonn and London, and at the same time gained practical experience at Christie's in London as well as at the Etude Jean-Louis Picard (now PIASA) in Paris. Markus Eisenbeis converted the auction house, preserving the tradition, into a modern company, competitive at an international level. The first move to larger premises in 1999 was a necessary step.

Today VAN HAM has about 60 employees. The young and dynamic teams are particularly distinguished by their commitment and continuity. The company’s move to its own new building in the summer of 2014 sets new standards in the industry in every way. It confirmed not only VAN HAM's clear commitment towards Cologne, but also demonstrates its economic success.

Philosophy and expertise
The route to VAN HAM's current success constitutes a balance between complementary matters: on one hand, modernization with an international focus; on the other, proven traditions.

Our close and trusting relationship with collectors and close, personal communication with museums and foundations form the basis of successful auctions. VAN HAM places great emphasis on personal consultation and comprehensive customer service. Our dedicated team of specialists is highly valued by customers at home and abroad, ensuring customer confidence in the long term. A network of international offices and regular Expert Days throughout Germany successfully complete our concept. Our customer magazine Art Magazine presents auction highlights and a significant amount of editorial content, making it unique in Germany.

The sector’s innovation driver
When it comes to digitalisation, VAN HAM is taking the leading role in Germany – it is the only national auction house to offer curated online auctions with a focus on Modernism and contemporary art, thus keeping its finger on the pulse of time. ONLINE-ONLY auctions complement the auction portfolio at two-week intervals, offering entirely new auction experiences. Since January 2019 VAN HAM has been the only German auction house with its own online auction portal, which allows it to operate independently of large technology platforms. In addition to being able to present the catalogues of the face-to-face auctions digitally and allowing live participation in the bidding process, it also constitutes an important innovation for the online auction format. Moreover, the customer data is stored on German servers and is exclusively managed by VAN HAM.

Well-presented information and transparency are particularly important to Markus Eisenbeis. Our consistent use and expansion of our online offerings has successfully transformed VAN HAM into an internationally oriented auction house. Detailed information for buyers and sellers; online bidding for collectors worldwide; a comprehensive database (the "Best Auction House Archive" according to Weltkunst, 2008); and our Gallery of Records: all these features have made our website an exciting, informative platform.

In recent years, and with the backing of guarantees, customers have increasingly decided to purchase objects without ever having seen the original. The progressive international nature of auctions made possible through the Internet ensures that the market will remain transparent for collectors and dealers. VAN HAM checks all objects valued at over €1,000 for theft and looting with the Art Loss Register, the world's largest private database of lost and stolen art. The process ensures that our auction house knows the proper provenance of each work of art. As these initiatives exemplify, VAN HAM's success is grounded its continued reputation as a trustworthy and professional auction house.

Significant auctions – milestones of the German art market
The year 2015 was a special one for the Cologne-based auction house – with the Achenbach Art Auction VAN HAM conducted the largest sale of contemporary art in Germany to date. The ‘auction of superlatives’ attracted not only tremendous attention among the public but also achieved unexpected auction records and a record turnover. This year, too, an incomparable corporate collection will be called up with the SØR Rusche Collection. With over 4,000 works it is larger than the Achenbach Art Auction, so that VAN HAM will once again conduct the largest auction of contemporary art in Germany. These unforgettable auctions formed yet another unique selling proposition of VAN HAM: its expertise in marketing extensive corporate collections. VAN HAM masters the challenge of handling large volumes at short notice like no other German auction house. Owning Germany's largest art auction warehouse, VAN HAM offers clients high flexibility and ability to act quickly. Thanks to Markus Eisenbeis's innovative and future-oriented mindset, this courageous expansion also sets a unique structure for artists' estates.

VAN HAM Art Publications
The company’s own publishing house, VAN HAM Art Publications, was founded in 2006. This scholarly branch of VAN HAM focuses on the publication of important catalogues of works. No other German auction house has published as many catalogues of works since then, in analogue as well as digital form. Publications on Karl Hofer’s (1878–1955) paintings and sketchbooks merit special mention. This year VAN HAM Art Publications will publish the catalogue of works by Otto Mueller (1874–1930) and, probably in 2020, one of works by Paul Kleinschmidt (1883–1949). In 2017 VAN HAM published its first online catalogue of works, which was dedicated to Friedrich Gräsel (1927–2013). All data are linked with each other and accessible to anyone, without qualification. The digital catalogue raisonné on Bernd Berner’s (1930–2002) oeuvre followed as early as 2018.

Karl Hofer Committee
With the founding of the Karl Hofer Committee in the summer of 2012, VAN HAM Art Publications has created the leading international institution that clarifies all questions concerning the attribution and authenticity of the works. Independent experts with diverse areas of specialization are continuing the research and evaluations previously conducted by Karl Bernhard Wohlert to ensure that all questions regarding Hofer's works can be answered in the future as well. With its work the Karl Hofer Committee aims to support museums and curators while also establishing a connection between Hofer collectors and the art market. The Committee will also continue Wohlert's work on and extensive research for the much-anticipated publication of the catalogue raisonné of Hofer's watercolors and drawings.

In recent years VAN HAM moreover gained international recognition for the responsible way it dealt with restitutions—the return of and compensation for cultural artifacts of Jewish fellow citizens stolen during the NS period. As early as 2009 the Süddeutsche Zeitung praised "Eisenbeis's impeccable behavior that sets a high standard for future cases, not only for his company." In 2014 the Handelsblatt wrote: "It is not the first time that the Cologne auctioneer has demonstrated instinct while handling restitution matters." In recent years several significant works that were believed lost could be auctioned off. Their restitution was successfully initiated, moderated, and completed by VAN HAM. Among them are paintings from the legendary collections of Alfred Hess, Ismar Littmann, Jacques Goudstikker, Max Stern, and Emma Budge.

For years VAN HAM has played a leading role in the fight against forgeries on the art market. The most important vehicle in this area is the "Datenbank kritischer Werke" ("Database of Critical Works") that serves the industry as a protection from forgeries. It was initiated about eight years ago by Markus Eisenbeis for the Association of German Art Auctioneers (Bundesverband Deutscher Kunstversteigerer, BDK), of which Eisenbeis has been vice president since 2000. This database remains internationally unique.

A space for encounters
With numerous art-related events VAN HAM regularly offers a sophisticated and professional programme for art historians, collectors and art lovers. The spectrum ranges from special sales, for instance on Thonet with an extensive accompanying programme, through to exhibitions, such as one on the Berlin artist Sarah Schumann this year. Additionally, VAN HAM holds symposia, for instance on ‘Factor human being: How can the generational transition succeed with art’, followed by extensive publications, and the Curator Award ceremony, which was initiated in collaboration with art magazine and which quickly became the most renowned award of its kind. The top curators of the German-speaking countries meet here at VAN HAM every year.

- Scholarly lectures on diverse topics with appropriate outside experts

- Events, which aim to make art and the art market more accessible to the younger generation

Supporting the next generation of art professionals
The professional advancement of young art historians is crucial to VAN HAM. In addition to offering internships and opportunities for trainees, VAN HAM provides art retailer apprenticeships as well as seminars for professional development. As an arts and antiques auctioneer licensed and publically sworn in by the Chamber of Commerce and Industry of Cologne, Markus Eisenbeis was on the examination board for a long time. He is a regular guest lecturer at universities encouraging the young talents and has been an independent lecturer at the University of Arts Berlin since 2016.

The new nuilding and a look into the future
Experience, expertise, trust, commitment, and passion for art shall remain our guiding principles in the future, in a new setting. The new, own premises are the necessary step for the successful expansion of VAN HAM.

The building is a visible statement and reflects the concept of VAN HAM: its clear echoes of the Bauhaus stand for the continuation of the company's tradition. At the same time the design of the building points to the present, but remains classic without being stuck in a specific period. The future focus will be on contemporary art. For five years the Modern, Post War & Contemporary Art section has been the one with the company’s highest revenue. Committed to its tradition, VAN HAM will remain "generalist." The traditional areas of Old Masters, 19th–century paintings, European Applied Arts, and Jewelry will be shown to great effect in the new building, because the architecture offers a calm and generous setting without taking centre stage. Its museum character presents works from all eras and genres to their best advantage.

Next to all the new developments, personal consulting and expertise based on knowledge and experience will remain the main element and, next to the passion for art, be the mainspring of a successful future. 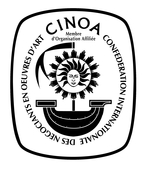